The feds need to shutdown the bitcoin scam now.

I live in Baltimore, let's say I have some hypothetical friends who are always looking for a good hustle.

Now imagine if my friends got together for a new get-rich-quick-scheme, the scheme is very simple. They invent something called cracken (bitcoins) that they start selling on a few blocks in Hamsterdam.

The way you get crackens is to do laps around the blocks in Hamsterdam. Initially when the scheme was setup, you could get a whole lot of crackens by merely doing a few strolls around the block. Needless to say my friends made out like bandits, since, after all they created the scheme and could take advantage of the first-come-first-serve rules.

Unfortunately for the rest of the hood, the number of laps required to get the same number of crackens keeps going up and after a while even the fittest folks in the neighborhood cannot do the lapse required to earn crackens.

Cracken mania takes hold and infects the whole city. Those with crackens start trading these crackens for exorbitant sums of money. No one really knows why they are buying crackens but it is the hot new commodity so who cares.

How long do you think it will be before the feds show up and shut down this obvious fraud? My guess is, not too long.

It is quite astonishing that the bitcoin scam has been allowed to mushroom into what it is today. Forget the crypto mambo-jumbo, that is just fancy nerd-talk meant to sway those who are easily impressed by nerdy nomenclature.

Bitcoin and its derivatives are a basic pyramid scam, but they are actually worst for two reasons. First, given that they are internet based their reach is vast in a way that'll make scammers of yore drool.
Secondly, there is absolutely nothing of value sitting at the base of this pyramid, in other words this is not a case of your traditional pyramid scheme where there is some initial input of some actual value. Bitcoin literally came out of thin air by way of a crypto algorithm.

The logic behind justifying value out of nothing rest on the ignorant libertarian argument that the federal government prints money and bestows value on it so similarly anyone can create value as long as you can get someone to accept it. This is nonsense that betrays ignorance of economics. If it were the case that any central bank can just print money and bestow value on it that will be universally accepted without anything of true value underpinning it, there will be no poor countries in the world, just ask Zimbabwe. 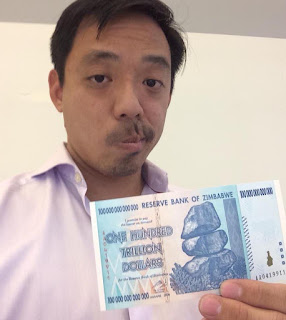 Another poor logic underpinning bitcoin is the very idea of crypto mining. This is an obvious  attempt to draw parallels with precious minerals. The problem of course is that precious minerals are real and have real uses. Gold for instance has all sorts of applications (ex electronics) beyond just its ornamental value. What exactly can I use my bitcoins for if I can't trade them to someone else for some other commodity of actual value?

Hopefully the authorities can jump in and shut this silliness down before it causes real harm to a lot of people, ie if it isn't too late already.

Popular posts from this blog

August 04, 2019
One of the great challenges for experienced developers when confronted with new concepts is being able to map one's existing knowledge to the new concept. As they say, there is nothing new under the sun, that is often more true for new development methodologies. Even when new jargon is brought to bear on new methodologies, often upon closer inspection you recognize that it is something that you already know that is being described in a new way (unfortunately sometimes in a convoluted way to make it seem new). Reactive/Component UI/UX frameworks are one such development, while their particular implementations may be new and novel, almost all of the underlying concepts are not new. This is hardly a thorough presentation of Reactive/Component frameworks, but rather an attempt to fill in some gaps for developers who have experience but might find themselves confused by some of these new kids on the block. The top 3 reactive component frameworks being React, Angular and Vue. Al
1 comment
Read more

June 02, 2014
One of the exciting developments in the recent JDK-8 release is the integration of the Nashorn Javascript engine. Vertically integrated Javascript web application development Nashorn allows for the development of applications in the Javascript language on the JVM, what this means in general is that you can build both the frontend and backend of web applications in the same language, ie Javascript. What's in it for you Vertically integrated Javascript development has great appeal as can be attested to by the popularity of NodeJS. For the JVM this offers massive opportunity. Currently a lot of businesses with JVM infrastructure are constrained by their inability to staff for their Java developer needs. With technology such as Nashorn, a JVM shop doesn't need to demand Java skills, instead as a JVM shop you can hire developers already skilled in Javascript and put them to work building your business applications while still taking full advantage of the massive JVM techn
Post a Comment
Read more